Discussion of all things crypto and blockchain.
Forum rules
This forum is open to the general public.
Post Reply
186 posts

Apple and Google come under scrutiny for scammy crypto apps

From Elon Musk Twitter impersonators to dubious Discord chats, cryptocurrency and non-fungible token (NFT) scammers have stolen billions of dollars from investors over the last few years. But now, politicians and law enforcement are turning their attention to Apple and Google — companies that operate huge app stores — and how they review fraudulent crypto apps.

In letters to Apple CEO Tim Cook and Google CEO Sundar Pichai on Thursday, Sen. Sherrod Brown (D-OH) asked that the companies explain their processes in reviewing and approving crypto trading and wallet apps for download on their app stores. Brown’s inquiry follows a recently released FBI report warning that 244 investors have been scammed out of $42.7 million from fraudulent cryptocurrency apps claiming to be credible investment platforms in under a year. 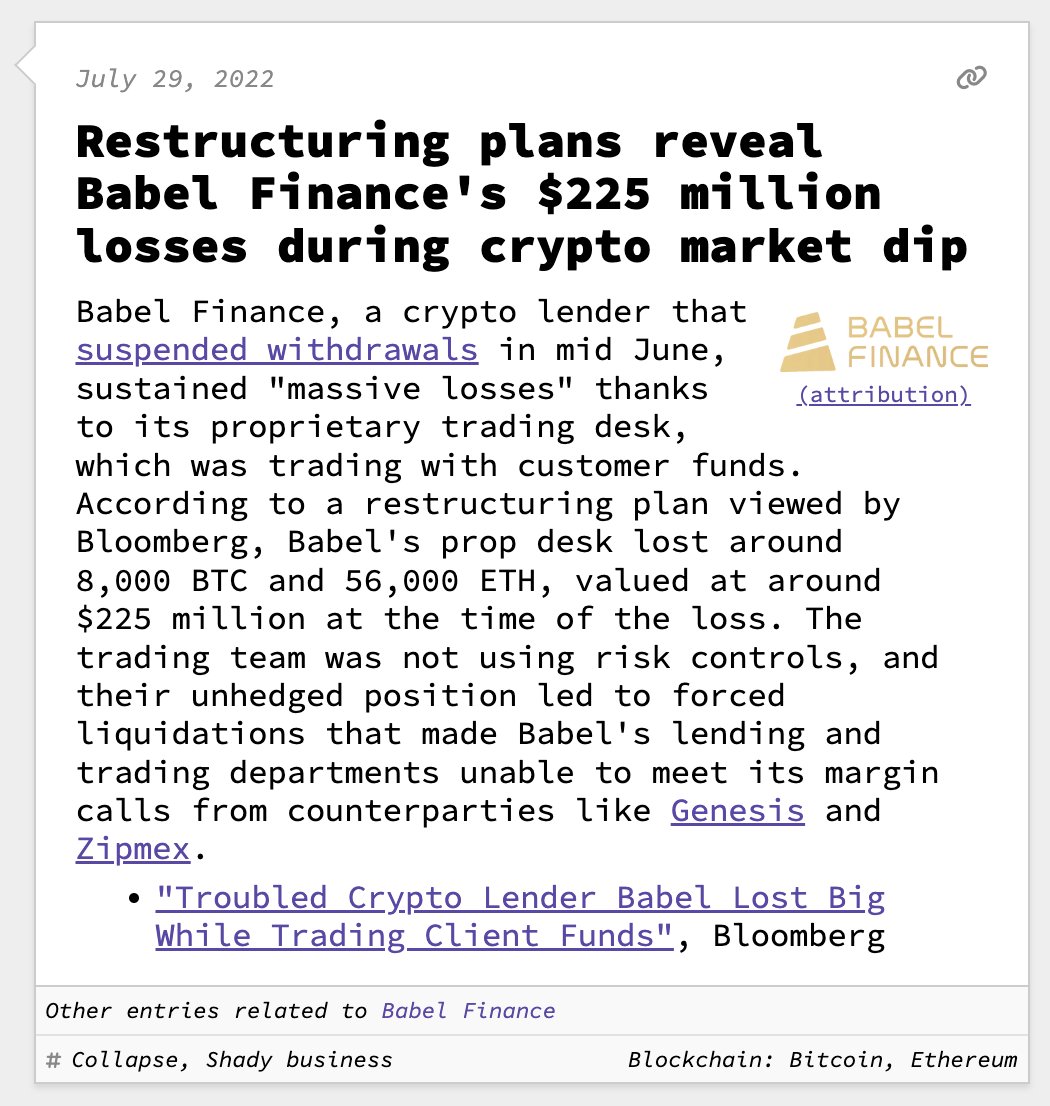 https://web3isgoinggreat.com/?id=restru ... market-dip
There are more ways than one to skin a cat.
Top 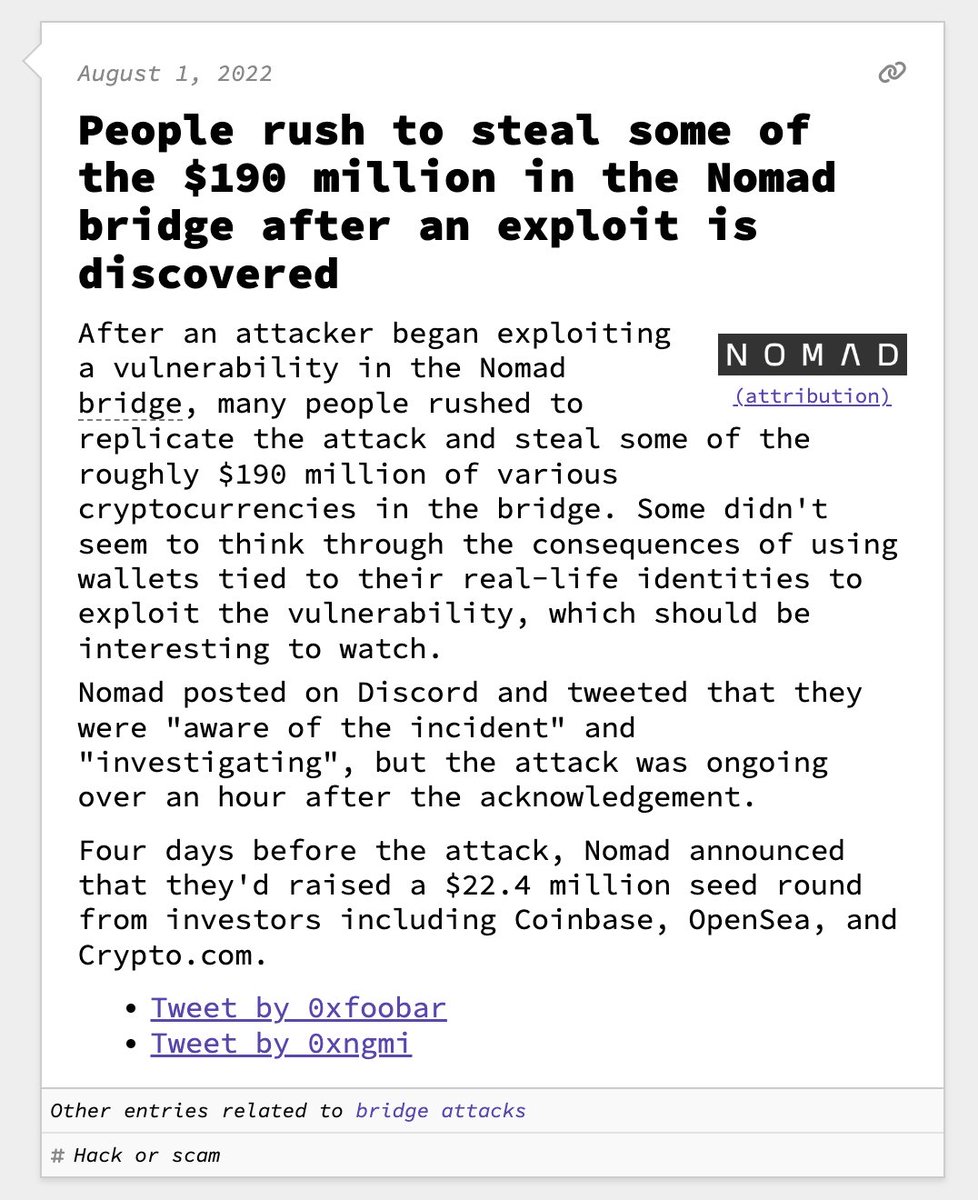 https://web3isgoinggreat.com/?id=nomad-bridge-exploit
There are more ways than one to skin a cat.
Top

Binance Says It Lost 90% Of Customers, 'Billions In Revenue' Due To KYC Compliance

“Binance is exponentially larger than its competitors. If you use real math, the numbers [of illicit activity] are the same industry-wide,” said Gambaryan.

The Securities and Exchange Commission today charged 11 individuals for their roles in creating and promoting Forsage, a fraudulent crypto pyramid and Ponzi scheme that raised more than $300 million from millions of retail investors worldwide, including in the United States.

"As the complaint alleges, Forsage is a fraudulent pyramid scheme launched on a massive scale and aggressively marketed to investors," said Carolyn Welshhans, Acting Chief of the SEC’s Crypto Assets and Cyber Unit. "Fraudsters cannot circumvent the federal securities laws by focusing their schemes on smart contracts and blockchains."

NYDFS alleged that Robinhood Crypto’s anti-money laundering and cybersecurity program was inadequately staffed and did not have sufficient resources to address risks. 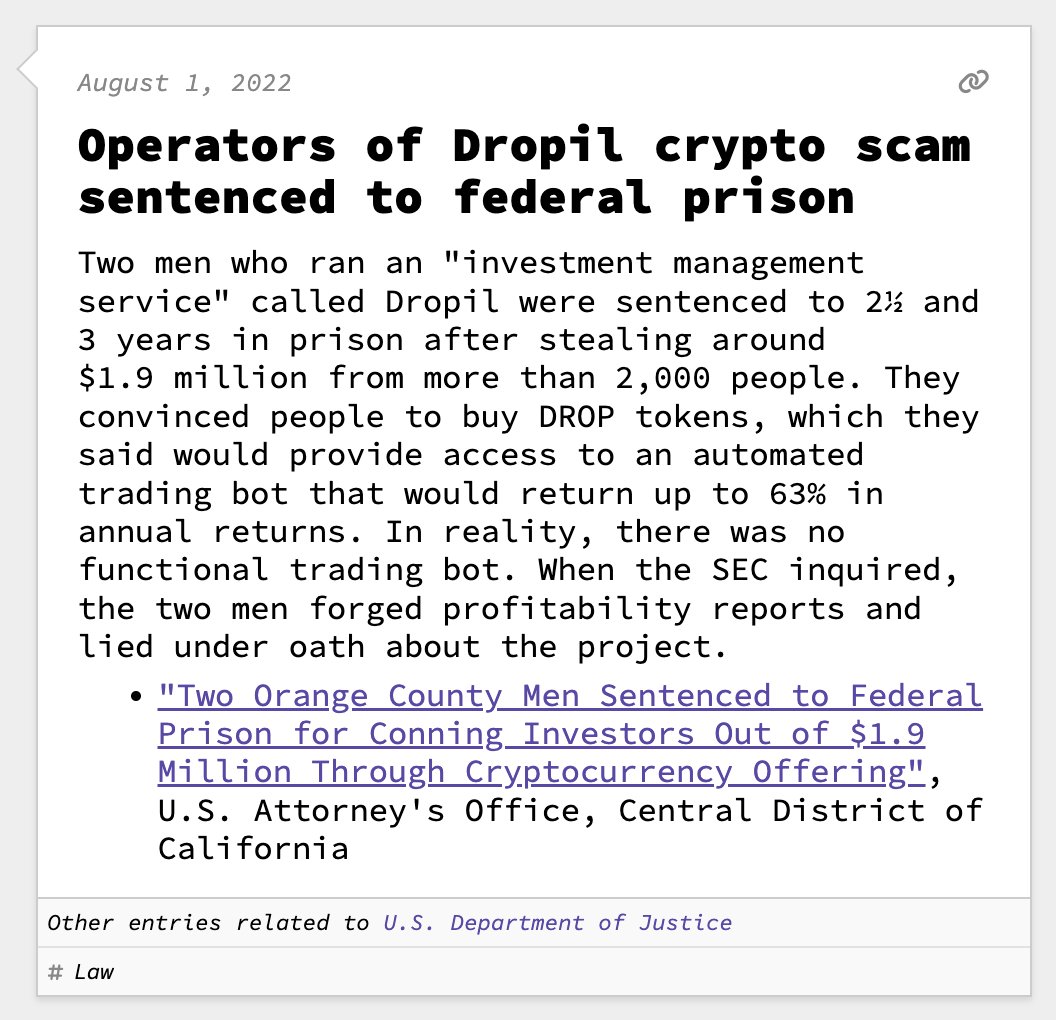 https://web3isgoinggreat.com/?id=dropil-scam
There are more ways than one to skin a cat.
Top 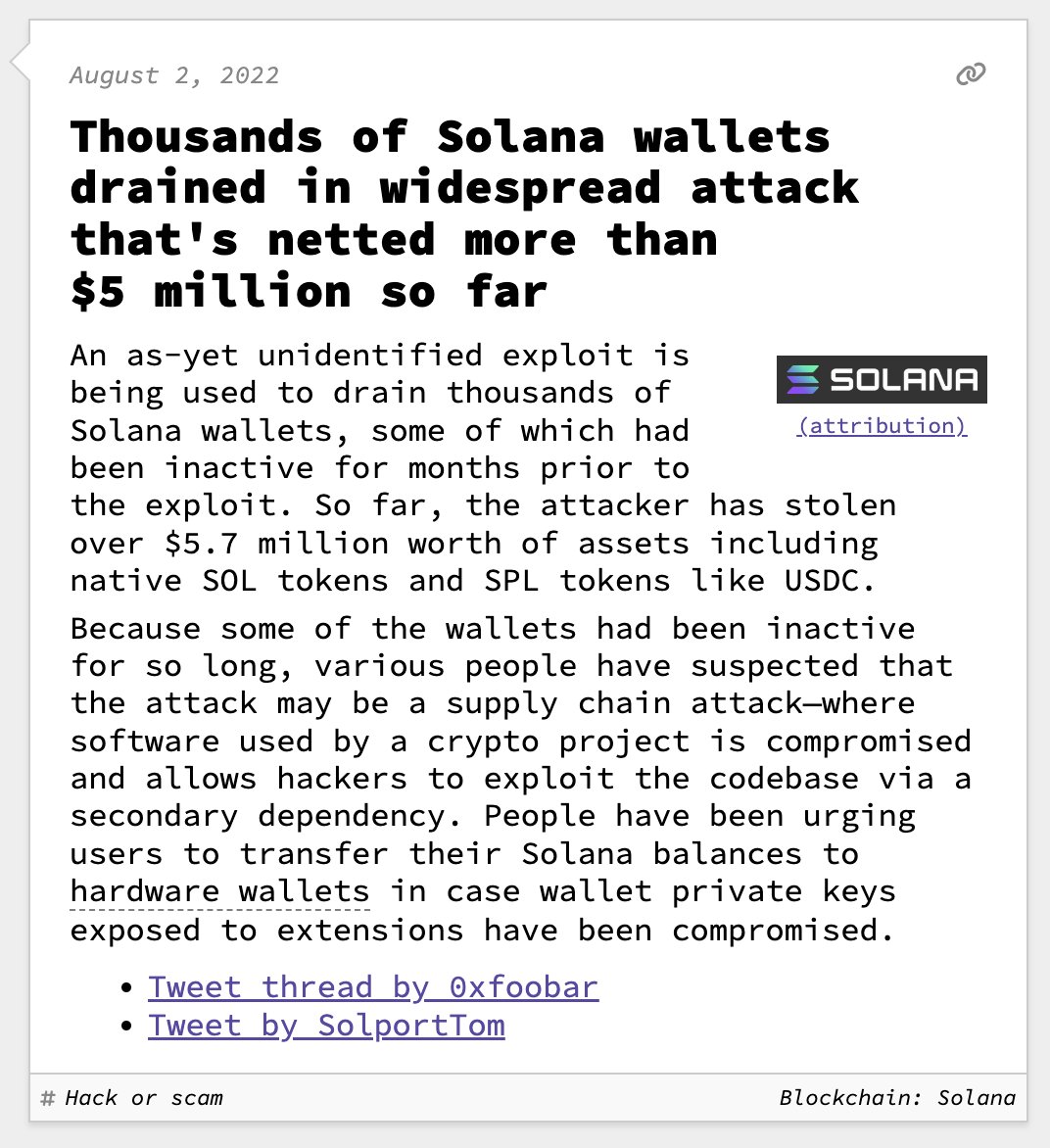 https://web3isgoinggreat.com/?id=thousa ... ts-drained
There are more ways than one to skin a cat.
Top 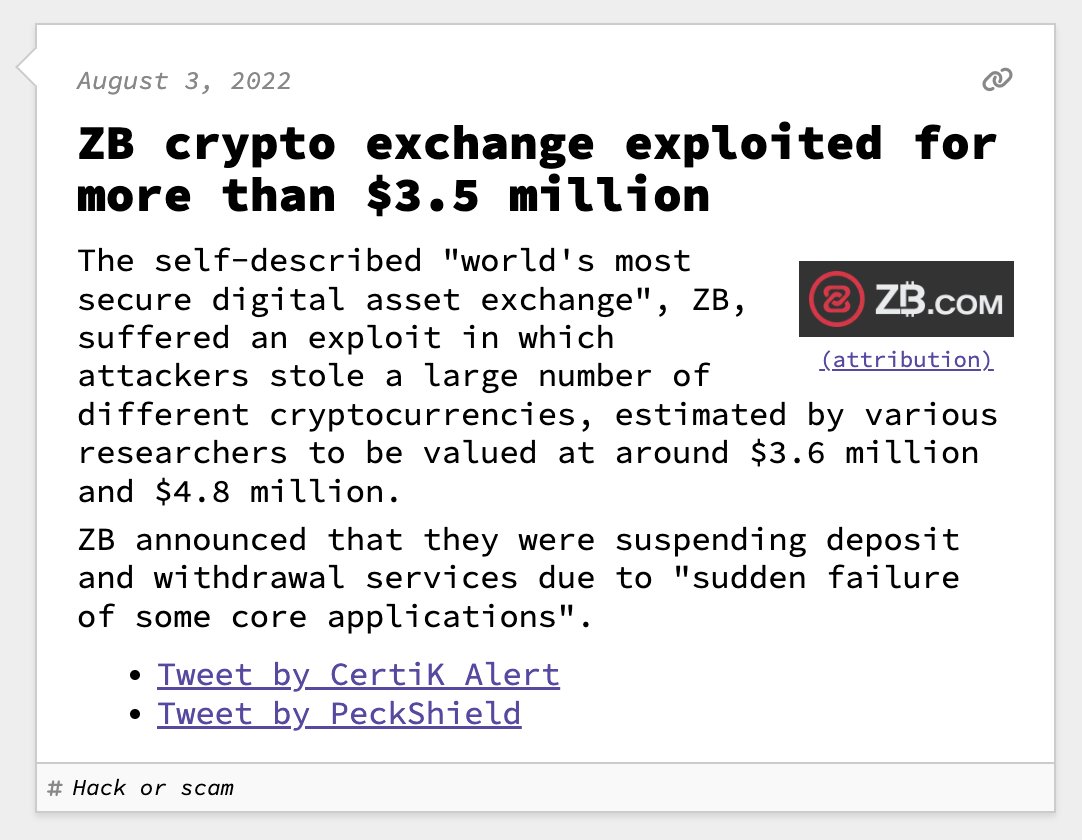 https://web3isgoinggreat.com/?id=zb-cry ... -5-million
There are more ways than one to skin a cat.
Top

Every U.S. Crypto Exchange (And Binance) Is Being Investigated By The SEC, Says Senator Lummis Staffer

Widely circulated reports that the U.S. Securities and Exchange Commission (SEC) is investigating $20 billion crypto exchange Coinbase are just the tip of the iceberg, according to a staffer from U.S. Senator Cynthia Lummis’ (R-Wy) office. The staffer says every U.S. crypto exchange—and the largest crypto exchange in the world, Binance—are in various stages of being investigated. There are more than 40 U.S. cryptocurrency exchanges, according to crypto data site, CoinGecko. The SEC has not responded to multiple requests for comment.

Master of Anons: How a Crypto Developer Faked a DeFi Ecosystem

The Macalinao brothers used a web of bogus identities to create the illusion of a dev community, juicing value on the Saber protocol and Solana blockchain.

The alleged operator of the illicit cryptocurrency exchange BTC-e was extradited yesterday from Greece to the United States to face charges in the Northern District of California.

“After more than five years of litigation, Russian national Alexander Vinnik was extradited to the United States yesterday to be held accountable for operating BTC-e, a criminal cryptocurrency exchange, which laundered more than $4 billion of criminal proceeds,” said Assistant Attorney General Kenneth A. Polite, Jr. of the Justice Department’s Criminal Division. “This extradition demonstrates the Department’s commitment to investigating and dismantling illicit cyber activity and would not have been possible without the relentless work of the Justice Department’s Office of International Affairs. The Justice Department thanks the Government of Greece, particularly the Ministry of Justice, for all their efforts in securing the defendant’s transfer to the United States.”

https://www.justice.gov/opa/pr/alleged- ... ted-states
There are more ways than one to skin a cat.
Top 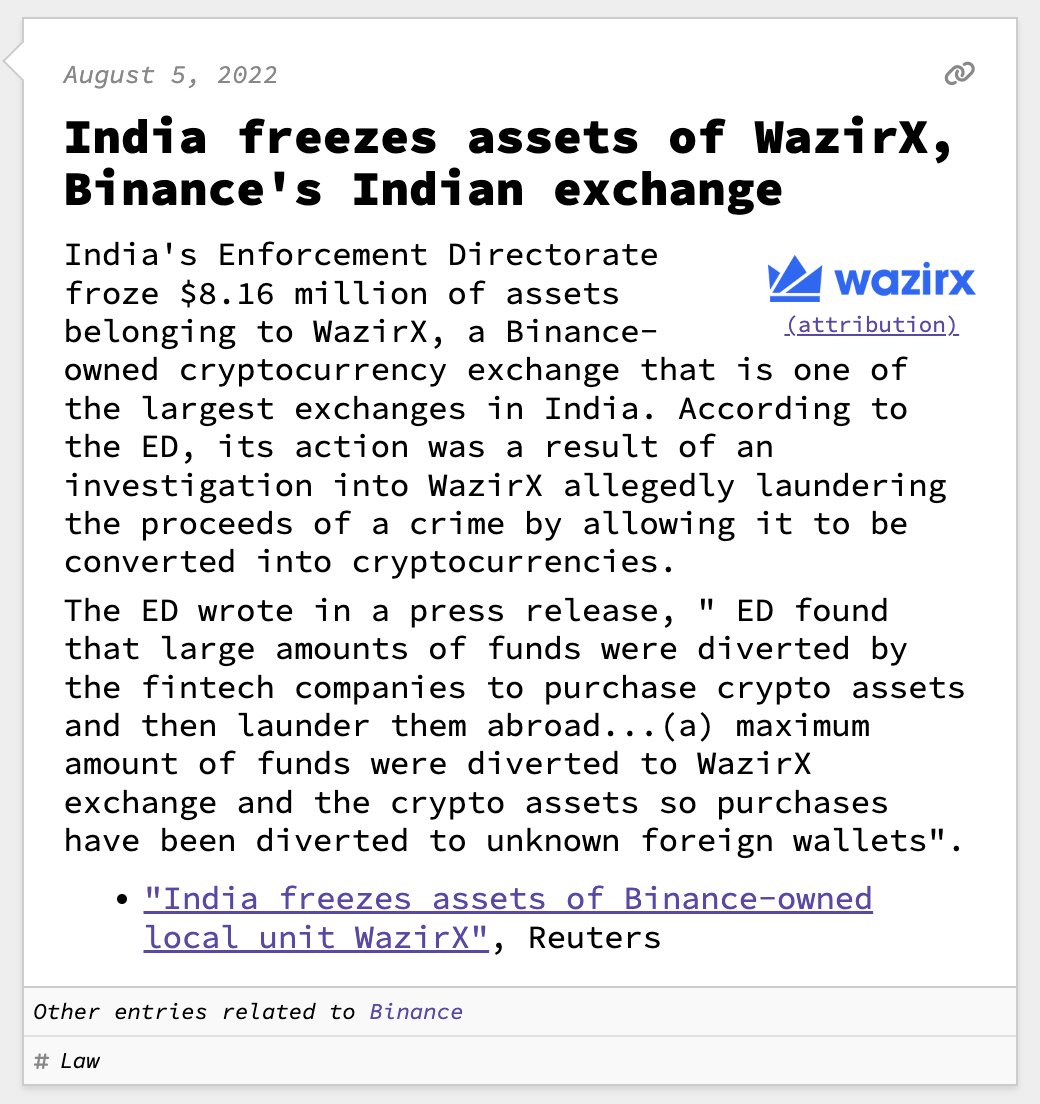 https://web3isgoinggreat.com/?id=india- ... n-exchange
There are more ways than one to skin a cat.
Top

Crypto exchange Coinbase got slapped with two separate class-action lawsuits this week, less than two weeks after the announcement that the company was reportedly under SEC investigation.

On Friday, Decrypt reported that two separate law firms filed the cases and said Coinbase investors suffered losses because of the bankruptcy clause in its SEC filing, as well as recent reports from the SEC probe that found the company was offering trading services that should've been registered as securities.

https://www.msn.com/en-us/money/markets ... e1bb33bfb0
There are more ways than one to skin a cat.
Top

The decision means that Americans are banned from using the service.

Similar sanctions were imposed in May 2022 on another popular service, Blender.io.

US sanctions Tornado Cash — and crypto shrieks in horror

The bad takes were all variations of the fundamental fallacy of cryptocurrency: that you can code your way around the rules of society.

https://davidgerard.co.uk/blockchain/20 ... in-horror/
There are more ways than one to skin a cat.
Top 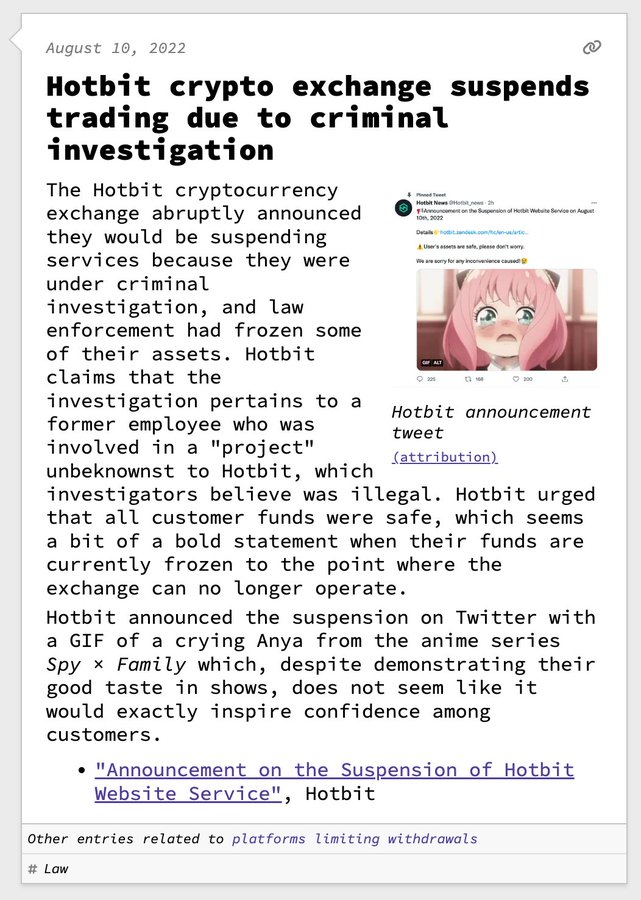 https://web3isgoinggreat.com/?id=hotbit ... estigation
There are more ways than one to skin a cat.
Top

RenBridge has been used to launder at least $540 million in crime-related crypto cash since 2020, according to new research from blockchain analytics firm Elliptic.

Cross-chain bridges are used to send digital assets across blockchains, bypassing a centralized service that can trace transactions.

“They’re effectively ungoverned, and so very vulnerable to hacks, or to being used in crimes like money laundering,” said David Carlisle, Elliptic’s vice president of policy and regulatory affairs.

Publicly traded crypto exchange Coinbase is under investigation by U.S. securities regulators over its token listing processes as well as its staking programs and yield-generating products, the company disclosed in its most recent quarterly report.

The disclosure underscores the heat Coinbase faces as a vocal (and closely regulated) U.S. crypto business. It is under pressure on multiple fronts, including its belief that certain tokens are not securities and therefore exempt from SEC purview. The SEC has taken a different stance in its ongoing case against an ex-Coinbase employee accused of insider trading.

https://www.msn.com/en-us/money/markets ... r-AA10wQbq
There are more ways than one to skin a cat.
Top

In a proposed securities class action filed on Wednesday, a host of plaintiffs say Voyager Digital chief Stephen Ehrlich and Cuban facilitated and furthered the firm’s “false and misleading promises of reaping large profits in the cryptocurrency market.”

It claims Voyager’s Earn Program Accounts, or EPAs, were unregistered securities the company continued to flog even after seven states banned its sale. Cuban and Ehrlich repeatedly made inflated and false statements about the safety associated with investing in Voyager in order to avoid bankruptcy, according to plaintiffs.

https://protos.com/mark-cuban-and-voyag ... it-claims/
There are more ways than one to skin a cat.
Top
Post Reply
186 posts