Discussion of all things crypto and blockchain.
Forum rules
This forum is open to the general public.
Post Reply
187 posts 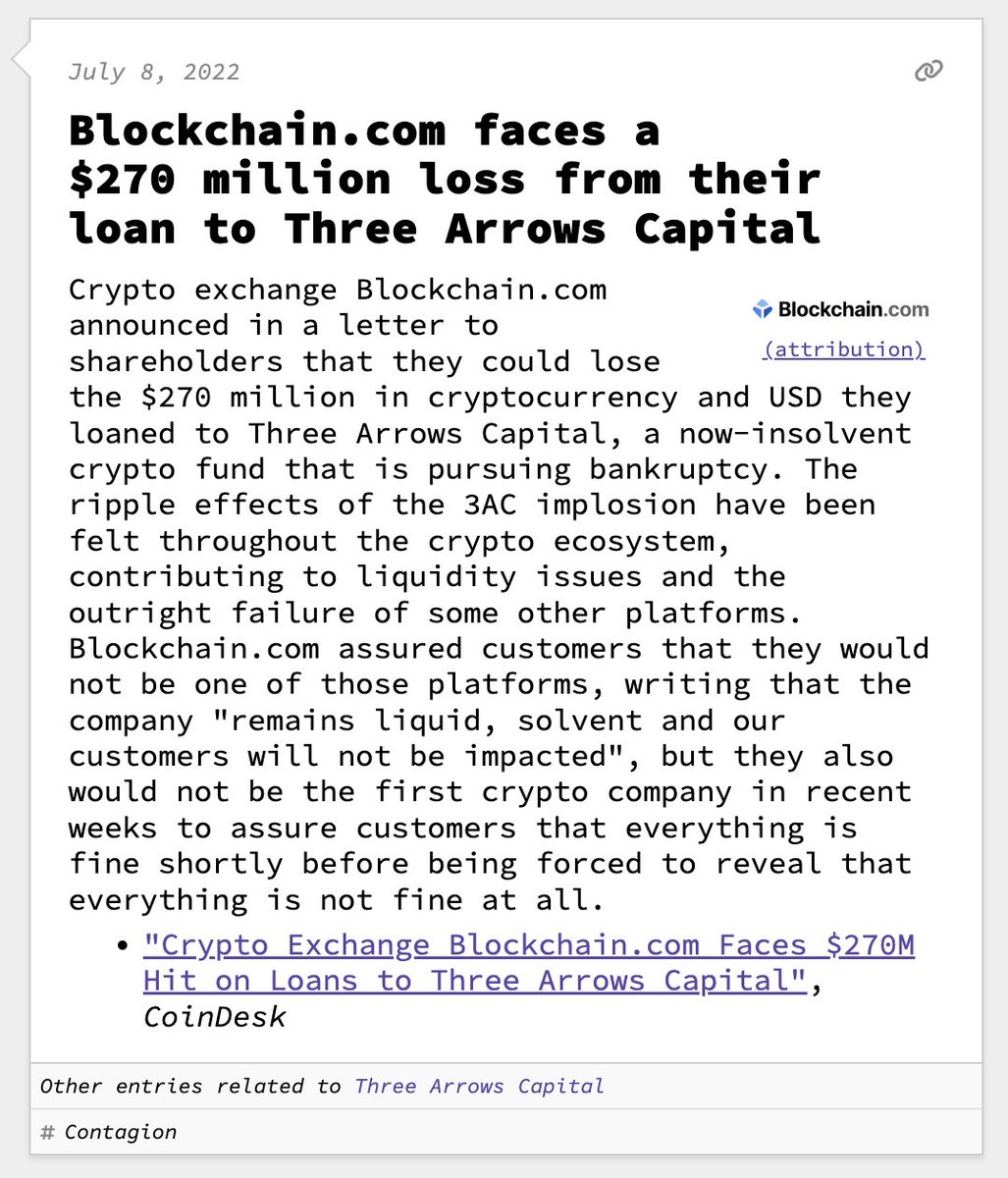 https://web3isgoinggreat.com/?id=blockc ... ws-capital
There are more ways than one to skin a cat.
Top

Federal Reserve Vice Chair Lael Brainard said Friday that regulation is needed or the industry could become a wider danger to the financial system.

The lack of regulation guidelines has been a confusing and troublesome issue for the crypto industry.

Su Zhu and Kyle Davies, the founders of Three Arrows Capital (3AC), the beleaguered crypto hedge fund, might have fled Singapore and their whereabouts are unknown, the firm’s lawyers said in its bankruptcy filing. 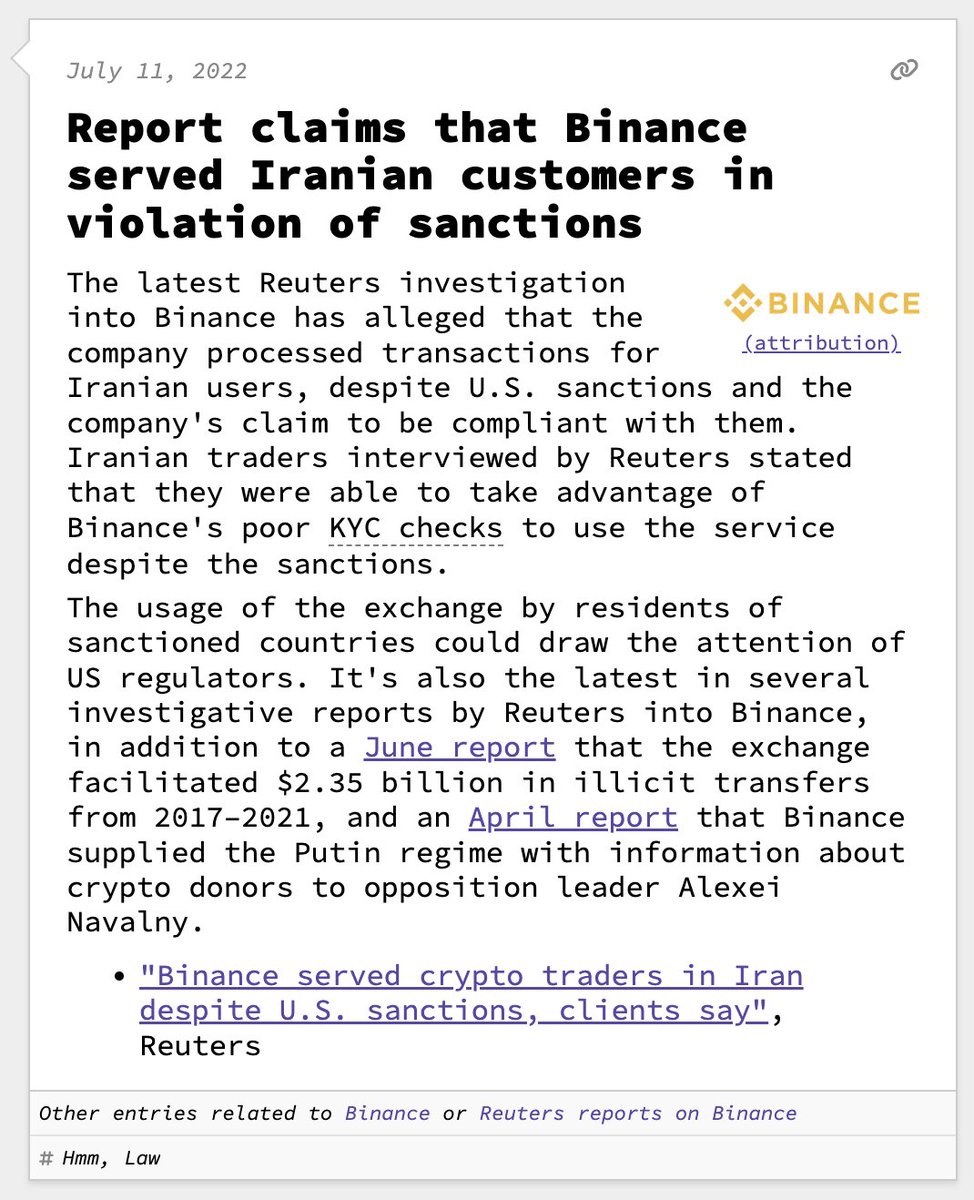 https://web3isgoinggreat.com/?id=report ... -sanctions
There are more ways than one to skin a cat.
Top

Judge Martin Glenn of the Southern District of New York granted the emergency motion during a court hearing on Tuesday. 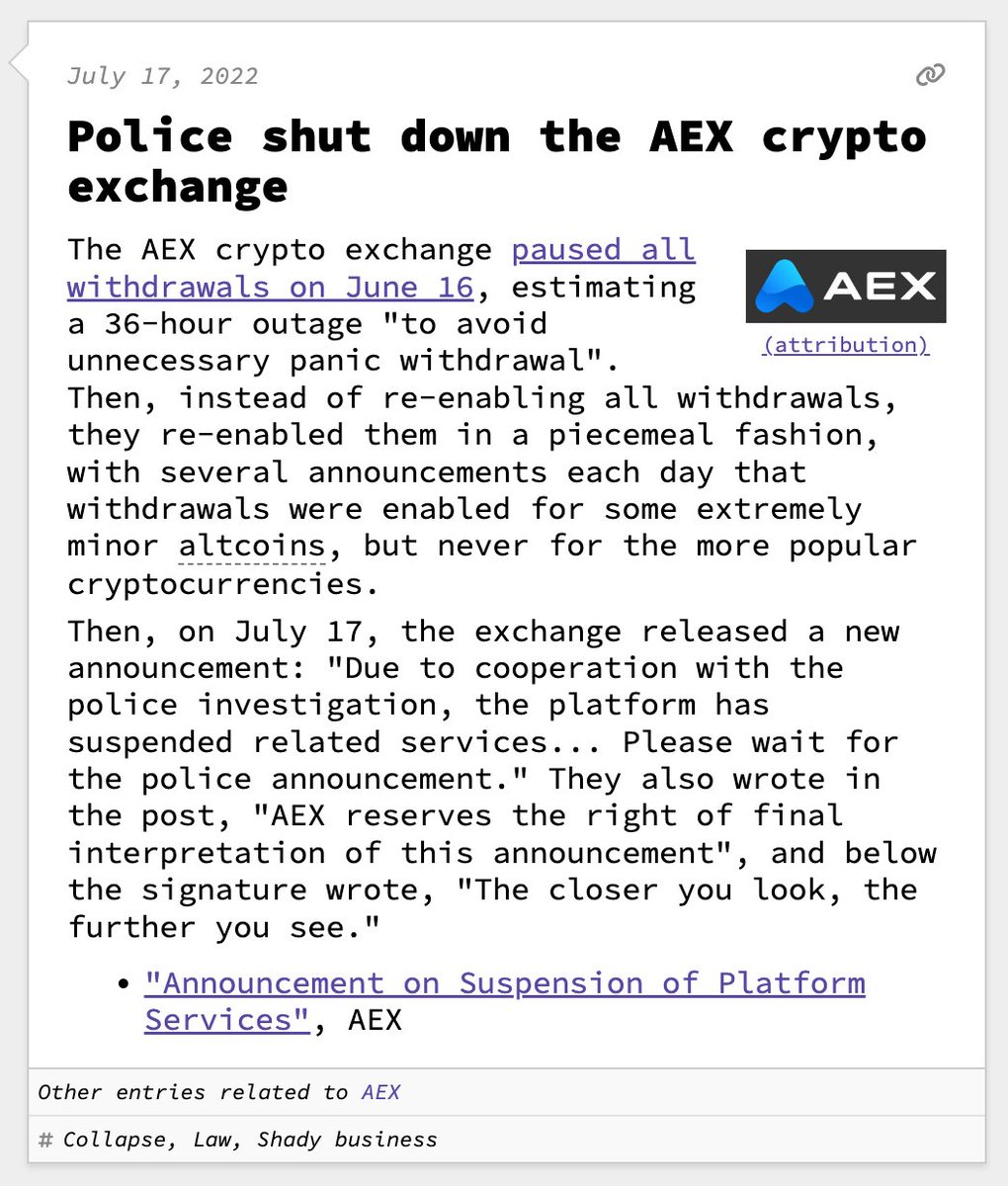 https://web3isgoinggreat.com/?id=police ... o-exchange
There are more ways than one to skin a cat.
Top

Binance has been fined 3.3 million euros ($3.4 million) fine by the Dutch central bank.

The regulator had warned last year that Binance was offering its services in the Netherlands without authorization.

The Commodity Futures Trading Commission today announced the U. S. District Court for the Southern District of New York entered a consent order on July 14 for a permanent injunction, monetary sanctions, and disgorgement of ill-gotten proceeds against Jimmy Gale Watson of Dallas, Texas.

As found in the order, Watson participated in the scheme by assisting in the strategic selection of suitable digital assets. As is typical of pump-and-dump schemes, he also secretly accumulated positions in digital assets in anticipation of price spikes following the misleading social media endorsements that touted the assets. These endorsements “pumped” the asset in order to increase demand, while deceptively concealing the previously accumulated position and the intent to promptly sell the position. He then “dumped” the digital asset by selling it into the inflated demand as price levels rose in response to the deceptive touting.

“The CFTC will continue actively to use its enforcement authority in the digital asset space to combat fraud and manipulation,” said CFTC Acting Director of Enforcement Gretchen Lowe.

https://www.cftc.gov/PressRoom/PressReleases/8558-22
There are more ways than one to skin a cat.
Top

Fraudulent crypto apps have scammed investors out of more than $42.7 million since October 2021.

Cybercriminals are capitalizing on the growing interest in crypto investing by using the names and logos of legitimate companies to attract investors. 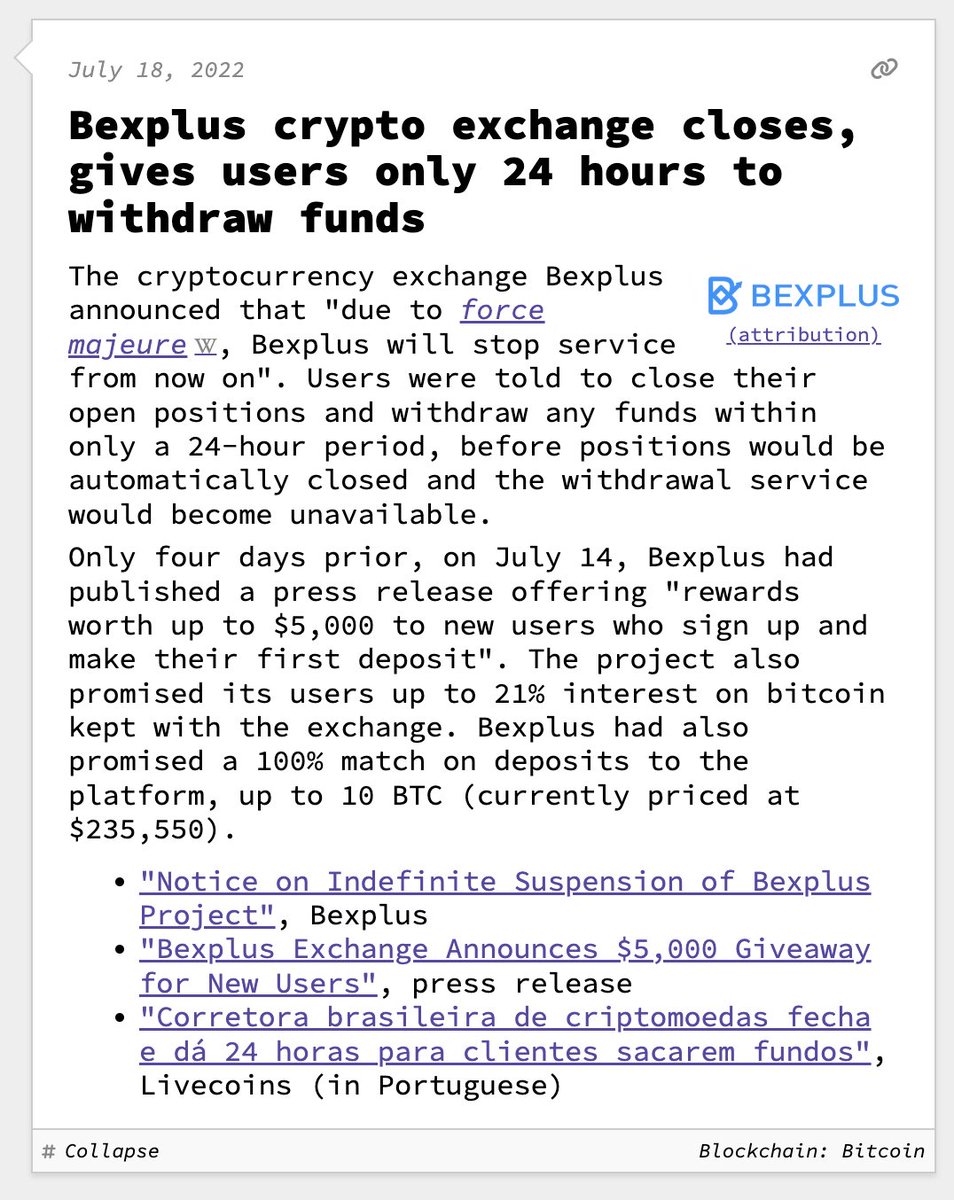 https://web3isgoinggreat.com/?id=bexplu ... draw-funds
There are more ways than one to skin a cat.
Top

Zipmex, a cryptocurrency exchange that operates in markets like Singapore and Thailand, halted withdrawals as the fallout from a series of defaults spreads further throughout the digital-assets industry.

The Asian platform is the latest to encounter financial difficulties stemming from dealings with troubled crypto lenders Babel Finance and Celsius Network Ltd. Zipmex has $48 million of exposure to Babel and $5 million with Celsius, it said on its Facebook page on Thursday.

Seven cryptocurrency exchanges in South Korea have been raided by prosecutors probing a fraud case in connection with the collapse of algorithmic stablecoin terraUSD (UST) and LUNA, according to Yonhap News Agency.

According to court documents and evidence presented at trial, Randall Crater, 51, of East Hampton, founded My Big Coin Pay Inc. (My Big Coin), a purported cryptocurrency and virtual payment services company headquartered in Las Vegas, Nevada, and offered virtual payment services through a fraudulent digital currency, “My Big Coins,” which he marketed to investors between 2014 and 2017 using misrepresentations about the nature and value of Coins. Crater and his associates falsely claimed that Coins was a fully functioning cryptocurrency backed by $300 million in gold, oil and other valuable assets. Crater also falsely told investors that My Big Coin had a partnership with MasterCard and that Coins could readily be exchanged for government-backed paper currency or other virtual currencies. Crater promulgated these misrepresentations through social media, the internet, email and text messages.

In reality, Coins were not backed by gold or other valuable assets, did not have a partnership with MasterCard and were not readily transferable. Over the course of the scheme, Crater misappropriated over $6 million of investor funds for his own personal gain, including spending hundreds of thousands of dollars on antiques, artwork and jewelry.

https://www.justice.gov/opa/pr/my-big-c ... aud-scheme
There are more ways than one to skin a cat.
Top

The SEC’s complaint alleges that, while employed at Coinbase, Ishan Wahi helped to coordinate the platform’s public listing announcements that included what crypto assets or tokens would be made available for trading. According to the SEC’s complaint, Coinbase treated such information as confidential and warned its employees not to trade on the basis of, or tip others with, that information. However, from at least June 2021 to April 2022, in breach of his duties, Ishan repeatedly tipped the timing and content of upcoming listing announcements to his brother, Nikhil Wahi, and his friend, Sameer Ramani. Ahead of those announcements, which usually resulted in an increase in the assets’ prices, Nikhil Wahi and Ramani allegedly purchased at least 25 crypto assets, at least nine of which were securities, and then typically sold them shortly after the announcements for a profit. The long-running insider trading scheme generated illicit profits totaling more than $1.1 million.

"We are not concerned with labels, but rather the economic realities of an offering," said Gurbir S. Grewal, Director of the SEC’s Division of Enforcement. "In this case, those realities affirm that a number of the crypto assets at issue were securities, and, as alleged, the defendants engaged in typical insider trading ahead of their listing on Coinbase. Rest assured, we’ll continue to ensure a level playing field for investors, regardless of the label placed on the securities involved."

After the collapse of Three Arrows Capital (3AC) bankrupted creditors and ignited a massive selloff in crypto, founders Su Zhu and Kyle Davies went into hiding for five weeks.

Now, the 35-year-olds have offered an exclusive mea culpa of sorts to Bloomberg, chock-a-block full of quotables for future business school professors to hold up as examples of what never, ever, to do. Ever. 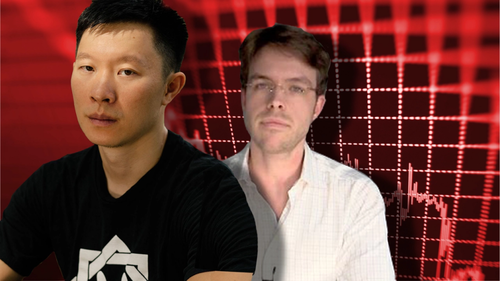 https://www.zerohedge.com/crypto/disgra ... massive-fk
There are more ways than one to skin a cat.
Top

People with funds locked in Voyager Digital have been sending letters to the judge presiding over the Chapter 11 bankruptcy case. These are excerpts from those letters.

It’s important to understand that schemes like this in the cryptocurrency industry are hurting real people who are often suffering losses they can’t afford. Regardless of what you may believe about individuals’ decisions to put significant amounts of money into Voyager, blame lies with the executives creating and running these companies and with the U.S. legal and regulatory system for allowing companies like this to operate.

https://blog.mollywhite.net/voyager-letters/
There are more ways than one to skin a cat.
Top

The probe into the failed "stablecoin" produced by Terra has intensified, as co-founder Daniel Shin's home was raided by authorities this week.

His home in Seoul was visited this week, as was the office of the app Chai, which Shin also founded, according to Decrypt.

Shin and Terra co-founder Do Kwon, who has been in the news non-stop since Luna's collapse, launched Terraform in 2018 in an attempt to compete with names like PayPal. They raised nearly $100 million between an ICO and funding rounds. As Zero Hedge contributor Quoth the Raven noted weeks ago, Terra and Luna were also pushed by crypto mega-bull Mike Novogratz.

https://www.zerohedge.com/markets/terra ... ast-week-0
There are more ways than one to skin a cat.
Top

Stollery admitted that, to entice investors, he falsified aspects of TBIS’s white papers, which purportedly offered investors and prospective investors an explanation of the cryptocurrency investment offering, including the purpose and technology behind the offering, how the offering was different from other cryptocurrency opportunities, and the prospects for the offering’s profitability. Stollery also planted fake client testimonials on TBIS’s website and falsely claimed that he had business relationships with the Federal Reserve and dozens of prominent companies to create the false appearance of legitimacy. Stollery further admitted that he did not use the invested money as promised but instead commingled the ICO investors’ funds with his personal funds, using at least a portion of the offering proceeds for expenses unrelated to TBIS, such as credit card payments and the payment of bills for Stollery’s Hawaii condominium.

https://www.justice.gov/opa/pr/ceo-tita ... aud-scheme
There are more ways than one to skin a cat.
Top

Crypto exchange Kraken is reportedly under investigation by the U.S. Treasury Department on suspicion it allowed Iranian users to utilize the site's services in violation of federal sanctions.

The New York Times reported Tuesday that the Treasury Department was likely to impose a fine against the exchange, though it did not suggest a timeline for the enforcement action. 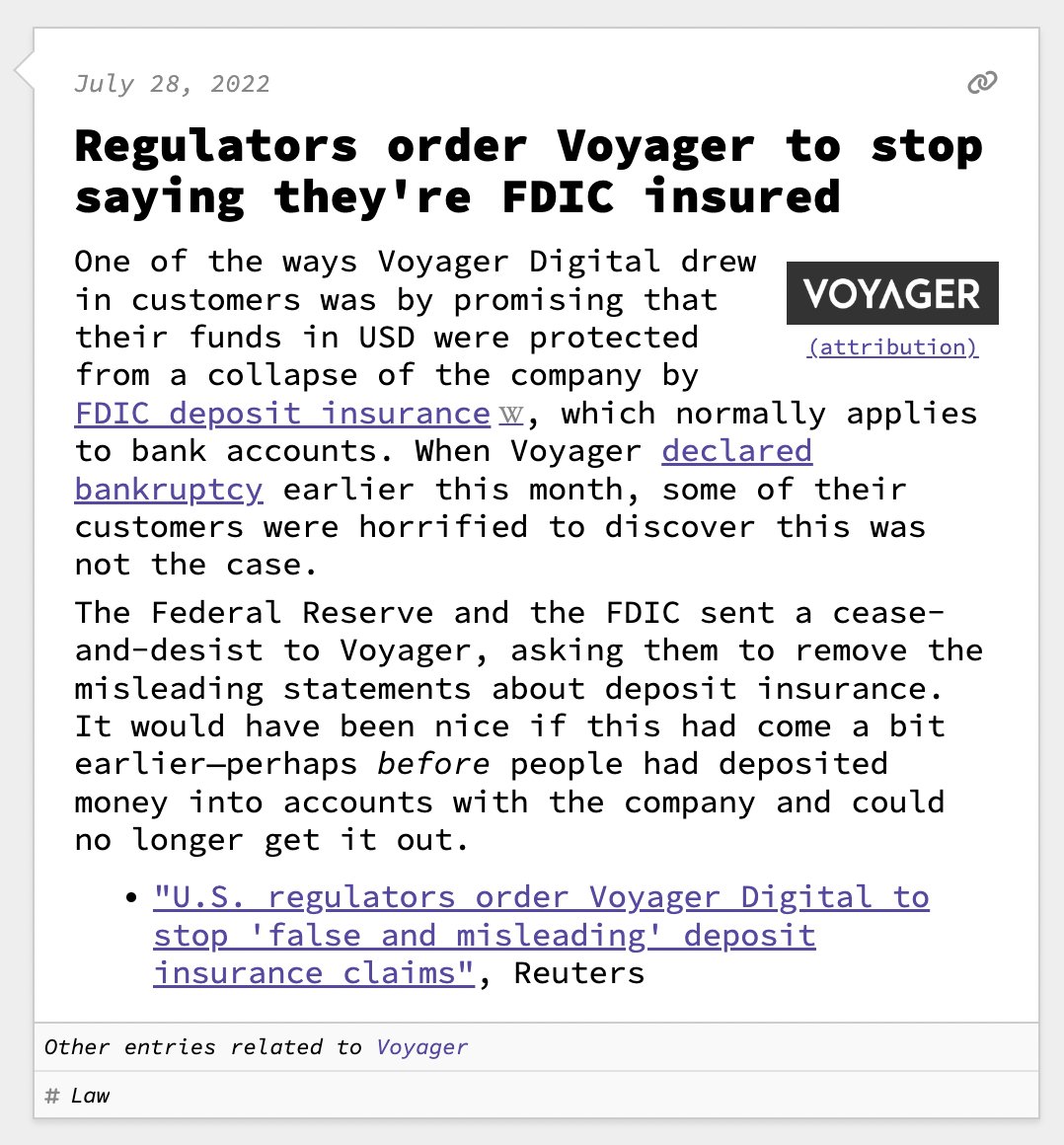 https://web3isgoinggreat.com/?id=regula ... ic-insured
There are more ways than one to skin a cat.
Top
Post Reply
187 posts

Users browsing this forum: No registered users and 2 guests