Discussion of all things crypto and blockchain.
Post Reply
1831 posts

Engineers at the lender have created the "JPM Coin," a digital token that will be used to instantly settle transactions between clients of its wholesale payments business.

tdtwedt wrote:JP Morgan is rolling out the first US bank-backed cryptocurrency to transform payments business

Engineers at the lender have created the "JPM Coin," a digital token that will be used to instantly settle transactions between clients of its wholesale payments business.

It won't be a "crypto-currency" as defined by the gold standard of bitcoin: trustless, censorship resistant, immutable, etc. Good try though.

If you wish to be an intelligent investor in the cryptocurrency markets, you are about to get your chance. The speculators have gone home, the optimists have packed their bags and the pessimists are running the show. 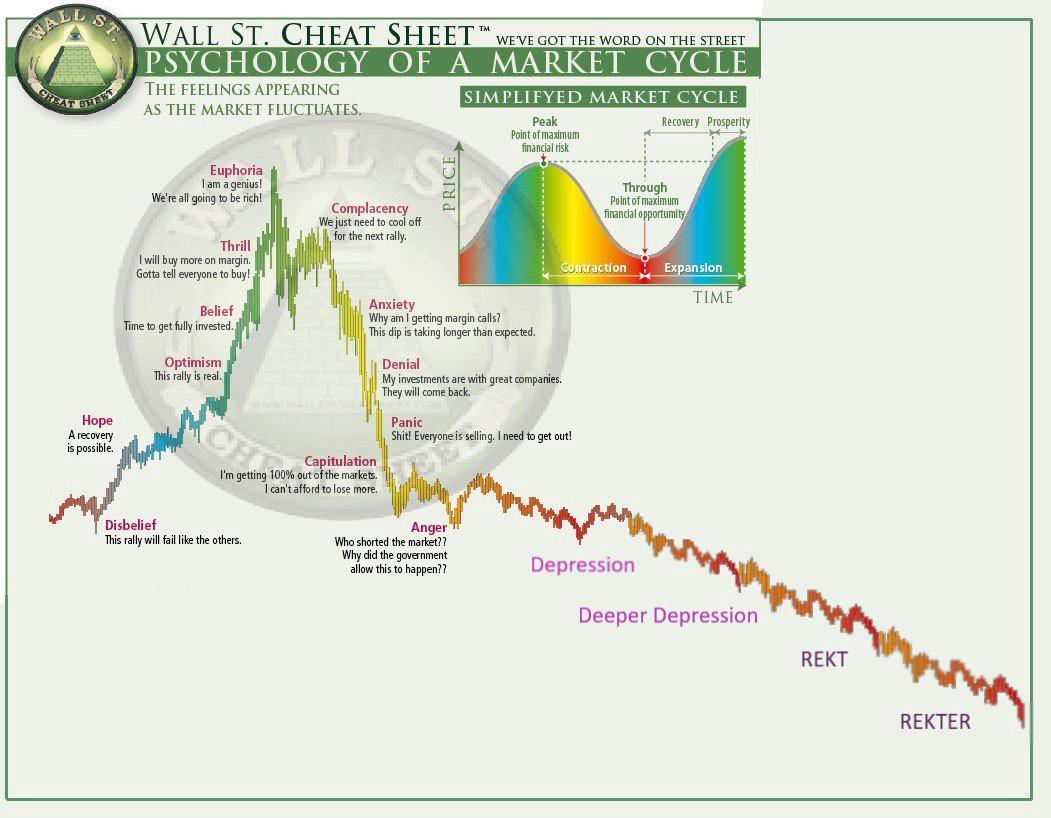 A Failed ICO Has Ended Up On eBay

Sponsy, a decentralized platform that allows sponsors and sponsees to conduct sponsorship deals, was expecting to raise millions of dollars in late 2017, even though it didn't have a product. The founder told the Financial Times that it was the norm for a company to raise tens of millions of dollars without a real product during the Great Crypto Bubble of 2017-2018. However, the company's lawyer advised Ivan Komar, the founder of the platform, not to ICO before a real product was built. Komar said that listening to his lawyer was the greatest mistake he made. 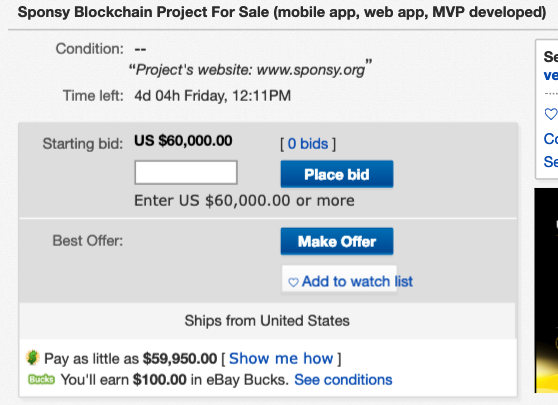 Have not had the chance to view the details on this yet, but thought I'd bring it up for your perusal.

An easy way to earn $10.00 in XLM from Coinbase (pretty cool coin too): coinbase.com/earn/xlm/invite/pfrzsgqk
Top

Bitcoin SV being delisted by Binance, ShapeShift and Kraken. Gemini stated they never supported it. Craig S Wright is digging himself a hole

Craig Wright is a fraud. If he was really Satoshi Nakamoto, he would be in prison for life.
Gentlemen prefer Engelhard.
AURUM MULTO MAGIS ANIMAS PERDIDIT QUAM FERRUM CORPORA CECIDIT
Top

Craig Wright is a fraud. If he was really Satoshi Nakamoto, he would be in prison for life.

True. Satoshi is likely more wanted that Assange was.

Seems to me Ledger Nano wallet technology in a Samsung Galaxy smart phone is a good marriage and intelligent way to get Crypto to the masses.

From past Coindesk Samsung articles:

Samsung is developing its own blockchain network and eyeing the issuance of its own token further down the road. Flagship cellphone, the Galaxy S10, has the ability to store cryptocurrency private keys and other features such as support blockchain-based digital signatures. Samsung officially revealed the cryptocurrency wallet, which is compatible with ether (ETH) and ethereum-based ERC20 tokens, although notably not bitcoin in early glimpses. S10 also supports decentralized apps (dapps) such as crypto gaming platform Enjin, beauty community Cosmee, crypto collectibles platform CryptoKitties and merchant payments service CoinDuck.

“We will always need hardware wallets, but to accompany a revolution crypto based on a personal sovereignty accessible to all, the smartphone will actually play a central role.” Ledger’s previous CEO and co-founder, Éric Larchevêque.
"Tyranny exists because perpetrators conform thoughtlessly to authority". Milgram (1974). Emphasis mine.
Top

McAfee coin sounds a bit sketchy. You can but it, but it can’t be traded. It’s value is always 0 in relation to other crypto’s. So once you have it what do you do with it? Do you sit on it and hope it becomes accepted and able to purchase goods with? Or do you try to sell it back off for cash? Which I thought crypto was a way to get a way from fiat

The crypto universe sure is confusing the hell out of me.
Stackin' for the fun of Stackin' 1 oz at a time

As much as I like John, I'd pass on his Freedom coin.
Gentlemen prefer Engelhard.
AURUM MULTO MAGIS ANIMAS PERDIDIT QUAM FERRUM CORPORA CECIDIT
Top

Bucketeer wrote:As much as I like John, I'd pass on his Freedom coin.

SilverDoge wrote:It won't be a "crypto-currency" as defined by the gold standard of bitcoin: trustless, censorship resistant, immutable, etc. Good try though.

You're absolutely right Doge. People will see it for what it is, and it won't be available to retail customers.

The FaceBook Coin has been described as having very similar in characteristics to JPM Coin, however FB Coin might ultimately draw a lot of people into Bitcoin, LTC & ETH. Here's why........

FaceBook is "the ghetto" of the Internet. I consider most FaceBook users to be low to mid IQ people that can't or don't know how to use a computer. Their computer is basically a Facebook terminal.

I know this because I have 44 neighbors who call me all the time to fix their computers. There is nothing actually wrong with their computers, it started running slower and slower because when they are trading cat pictures, or they are playing games on FB.

All I do is clean-up, restore, or reload Windows. They always ask me how badly their computer was "infected" and I just tell them not to worry, it's all fixed.

Remember when AOL was all the rage, and suddenly everybody and grandma wanted a computer to swap cat pictures?

Facebook has the same customer base that AOL had. Do you know that over 20% of AOL users still pay AT&T to use AOL?

Therefore, for FaceBook to successfully launch FBCoin, they will have to create a very easy way to introduce their user base to Crypto. As soon as their customers become educated and comfortable using FBCoin, some percentage of them will start migrating to Bitcoin.

One of my major complaints about Bitcoin is that it is still reasonably difficult for somebody to understand what it is, how it works, how to buy and sell it, how to transfer it between themself and another party, and how to safely store it.

I can easily envision an ETF for Bitcoin, but not for FBCoin, which is supposedly to have a stable value, although it may provide a regular "dividend" or "interest", probably the 4 week T-Bill rate which is currently about 2.4%.

Adoption is the key to higher dollar values for Bitcoin, and FaceBook is going teach a lot of their users how Crypto works.

Wonder how buyers of FBCoin would feel watching Bitcoin make a $5000 increase in a few months time, yet their FBCoin is still valued at $1, and never changes in value because it is a stablecoin. There's gonna be a lot of rats jumping that ship!

How will the Justice Department, the SEC, the Treasury Department, Congress, and POTUS are going to view FBCoin. I keep hearing Facebook is a monopoly because of the similar businesses they have purchased in the past, and needs to be reviewed for, at least, monopolistic practices.

If you hold Bitcoin, stop worrying about the price, and look for new inroads for adoption.

First they ignore you, then they laugh at you, then they fight you, then WE win!
Gentlemen prefer Engelhard.
AURUM MULTO MAGIS ANIMAS PERDIDIT QUAM FERRUM CORPORA CECIDIT
Top
Post Reply
1831 posts

View New Posts
All rights reserved. Bullionstacker.com, LLC ©2020
Powered by phpBB® Forum Software © phpBB Limited
BullionStacker is not responsible for any trades made on this website, please use your own common sense when dealing with other users.
Bullionstacker.com, LLC is a participant in the Amazon Services LLC Associates Program, an affiliate advertising program designed to provide a means for sites to earn advertising fees by advertising and linking to amazon.com.