Discussion of all things crypto and blockchain.
Forum rules
This forum is open to the general public.
Post Reply
313 posts 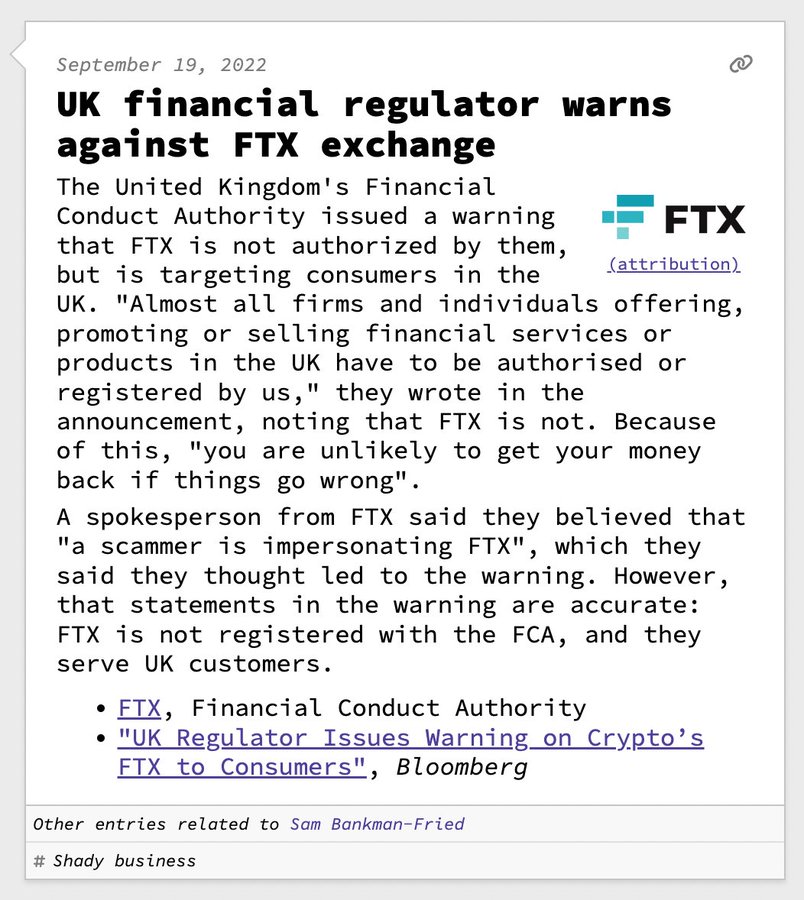 https://web3isgoinggreat.com/?id=uk-fin ... x-exchange
There are more ways than one to skin a cat.
Top

On Tuesday, crypto market making firm Wintermute said that it had $160 million stolen from its Ethereum vault, a type of crypto wallet account holding its assets in a smart contract.

While the Wintermute team has yet to provide an official post-mortem, security analysts have offered some insights into the hack. According to Mudit Gupta, Polygon's chief information security officer, a vulnerability may well have enabled the hacker to calculate the private keys of the vault’s admin address — allowing them to drain the vault of its funds.

Two McLarens, two BMWs and a Lamborghini make up just a few of the $2 million worth of assets seized from a 23-year-old from Whitby, Ont., as his investors try to recoup millions of dollars they handed over to the self-described "Crypto King."

But so far, Aiden Pleterski's assets fall far short of what his investors claim they're owed.

Creditors are working to unravel where at least $35 million provided to Pleterski and his company AP Private Equity Limited for cryptocurrency and foreign exchange investments ended up, according to a fraud recovery lawyer and documents filed in two separate actions reviewed by CBC Toronto. 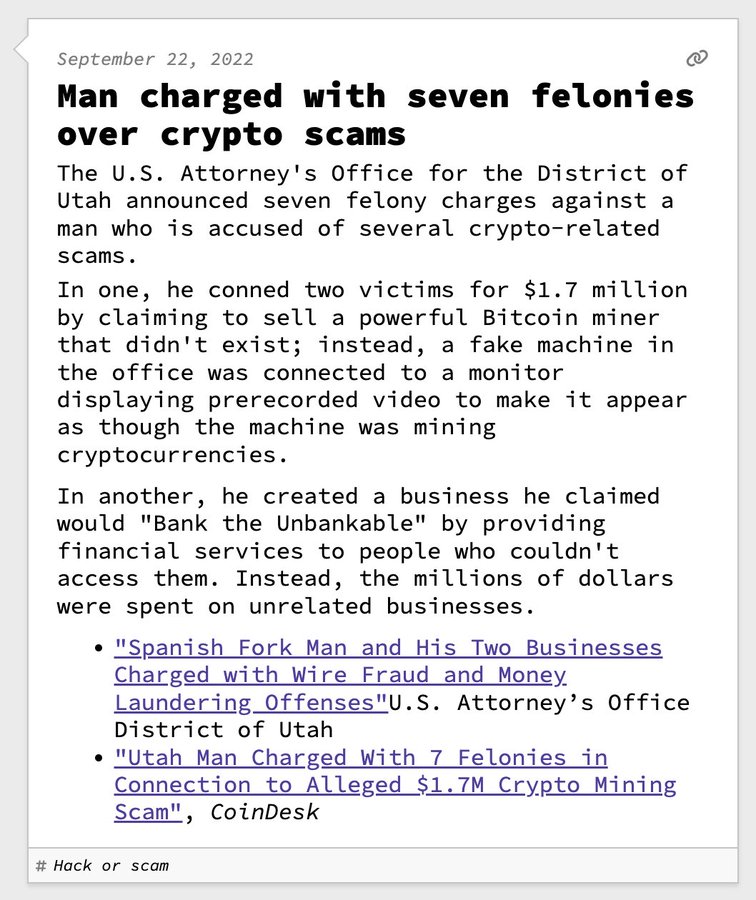 https://web3isgoinggreat.com/?id=man-ch ... ypto-scams
There are more ways than one to skin a cat.
Top

“Today’s actions demonstrate the CFTC’s commitment to aggressively pursuing individuals and their operations who purposefully seek to evade regulatory oversight at the expense of retail customers,” said Chairman Rostin Behnam. “I commend our dedicated enforcement team for pursuing this scheme which touches on many areas of concern regarding this growing market.”

“These actions are part of the CFTC’s broader efforts to protect U.S. customers in a rapidly evolving decentralized finance environment,” said Acting Director of Enforcement Gretchen Lowe. “Margined, leveraged, or financed digital asset trading offered to retail U.S. customers must occur on properly registered and regulated exchanges in accordance with all applicable laws and regulations. These requirements apply equally to entities with more traditional business structures as well as to DAOs.”

https://www.cftc.gov/PressRoom/PressReleases/8590-22
There are more ways than one to skin a cat.
Top

U.S. Attorney Damian Williams said: “Taxpayers are required to truthfully report their tax liabilities on their returns, and liabilities that arise from cryptocurrency transactions are not exempt. The government is committed to using all of the tools at its disposal, including John Doe summonses, to identify taxpayers who have understated their tax liabilities by not reporting cryptocurrency transactions, and to make sure that everyone pays their fair share.”

Deputy Assistant Attorney General David A. Hubbert said: “Taxpayers who transact with cryptocurrency should understand that income and gains from cryptocurrency transactions are taxable. The information sought by the summons approved today will help to ensure that cryptocurrency owners are following the tax laws.

IRS Commissioner Charles P. Rettig said: “The government’s ability to obtain third-party information on those failing to report their gains from digital assets remains a critical tool in catching tax cheats. The court’s granting of the John Doe summons reinforces our ongoing, significant efforts to ensure that everyone pays their fair share. Taxpayers earning income from digital asset transactions need to come into compliance with their filing and reporting responsibilities.”

https://www.justice.gov/usao-sdny/pr/ir ... who-failed
There are more ways than one to skin a cat.
Top

A Forbes report detailed how Helium insiders made roughly $250 million from the blockchain network to the detriment of the community.

According to the report, one of the wallets is connected to the Helium’s CEO wife.

The report also noted that Helium has a revenue generation problem.

https://archive.ph/ufRVl
There are more ways than one to skin a cat.
Top

Prosecutors in Seoul said Monday in a text message that the international police organization has issued a Red Notice for Kwon, the latest inglorious chapter of a $2 trillion rout in digital assets that exposed hugely risky practices. Neither Interpol, Kwon nor Terraform Labs immediately replied to emails seeking comment.

The filings state the company offered investors interest-earning accounts without first registering them as securities.

The orders prevent Nexo from offering this product to residents until it meets the necessary registration requirements.

South Korean authorities told CNBC on Wednesday that they have asked two cryptocurrency exchanges KuCoin and OXK to freeze more than $60 million worth of bitcoin linked to Do Kwon.

Kwon is the founder of Terraform Labs, the company behind the algorithmic stablecoin terraUSD or UST and its sister token luna, whose $60 billion collapse sent shockwaves through the market.

South Korean authorities have sought Kwon’s arrest and claimed he is on the run. Kwon has insisted that he is not hiding.

The filings state the company offered investors interest-earning accounts without first registering them as securities.

The orders prevent Nexo from offering this product to residents until it meets the necessary registration requirements.

According to state regulators, the crypto lending firm is insolvent without their $NEXO token holdings. The same situation that led to Celsius Network's collapse...

https://dirtybubblemedia.substack.com/p/is-nexo-nexto
There are more ways than one to skin a cat.
Top

The SEC’s complaint alleges that starting in January 2018, Kane and Hydrogen, a New York-based financial technology company, created its Hydro token and then publicly distributed the token through various methods: an “airdrop,” which is essentially giving away Hydro to the public; bounty programs, which paid the token to individuals in exchange for promoting it; employee compensation; and direct sales on crypto asset trading platforms. The complaint further alleges that, after distributing the token in those ways, Kane and Hydrogen hired Moonwalkers, a South Africa-based firm, in October 2018, to create the false appearance of robust market activity for Hydro through the use of its customized trading software or “bot” and then selling Hydro into that artificially inflated market for profit on Hydrogen’s behalf. Hydrogen allegedly reaped profits of more than $2 million as a result of the defendants’ conduct.

“Companies cannot avoid the federal securities laws by structuring the unregistered offers and sales of their securities as bounties, compensation, or other such methods,” said Carolyn M. Welshhans, Associate Director of the SEC’s Enforcement Division. “As our enforcement action shows, the SEC will enforce the laws that prohibit such unregistered fund-raising schemes in order to protect investors.”

“As we allege, the defendants profited from their manipulation by creating a misleading picture of Hydro’s market activity,” said Joseph Sansone, Chief of the Enforcement Division’s Market Abuse Unit. “The SEC is committed to ensuring fair markets for all types of securities and will continue to expose and hold market manipulators accountable.”

The economic intelligence agency, in a statement, revealed that WazirX’s utility token ‘WRX’ and an Ethereum token Tether ‘USDT’ has been frozen with respect to an investigation being conducted against one Aamir Khan and others relating to the Mobile Gaming Application ‘E-nuggets’.

Pro-Russian groups are raising funds in crypto to prop up military operations and evade U.S. sanctions

Pro-Russian groups are raising funds in cryptocurrency to prop up paramilitary operations and evade U.S. sanctions as the war with Ukraine wages on, a research report published Monday revealed.

The Commodity Futures Trading Commission today announced it filed a complaint in the U.S. District Court for the Southern District of Florida against Florida resident Adam Todd and four companies he controlled – Digitex LLC, Digitex Limited, Digitex Software Limited, and Blockster Holdings Limited Corporation. The complaint alleges that Todd and his companies operated a digital asset exchange under the trade name “Digitex Futures.” Todd and Digitex Futures are charged with illegally offering futures transactions on a platform other than a designated contract market and also with attempting to manipulate the price of the Digitex Futures native token.

In its continuing litigation, the CFTC seeks full restitution, disgorgement of ill-gotten gains, civil monetary penalties, permanent trading and registration bans, and a permanent injunction against further violations of the Commodity Exchange Act (CEA), as charged.

“The CFTC’s action against Adam Todd and Digitex Futures underscores the primacy of the CEA’s core registration provisions that are designed to ensure the structural integrity of our nation’s derivatives markets.” said Acting Director of Enforcement Gretchen Lowe. “Further, the CFTC will vigorously investigate potential manipulative trading activity to ensure confidence in markets remains strong.”

https://www.cftc.gov/PressRoom/PressReleases/8605-22
There are more ways than one to skin a cat.
Top

The Securities and Exchange Commission today announced charges against Kim Kardashian for touting on social media a crypto asset security offered and sold by EthereumMax without disclosing the payment she received for the promotion. Kardashian agreed to settle the charges, pay $1.26 million in penalties, disgorgement, and interest, and cooperate with the Commission’s ongoing investigation.

The SEC’s order finds that Kardashian failed to disclose that she was paid $250,000 to publish a post on her Instagram account about EMAX tokens, the crypto asset security being offered by EthereumMax. Kardashian’s post contained a link to the EthereumMax website, which provided instructions for potential investors to purchase EMAX tokens.

"This case is a reminder that, when celebrities or influencers endorse investment opportunities, including crypto asset securities, it doesn’t mean that those investment products are right for all investors," said SEC Chair Gary Gensler. "We encourage investors to consider an investment’s potential risks and opportunities in light of their own financial goals."

"Ms. Kardashian’s case also serves as a reminder to celebrities and others that the law requires them to disclose to the public when and how much they are paid to promote investing in securities," Chair Gensler added. 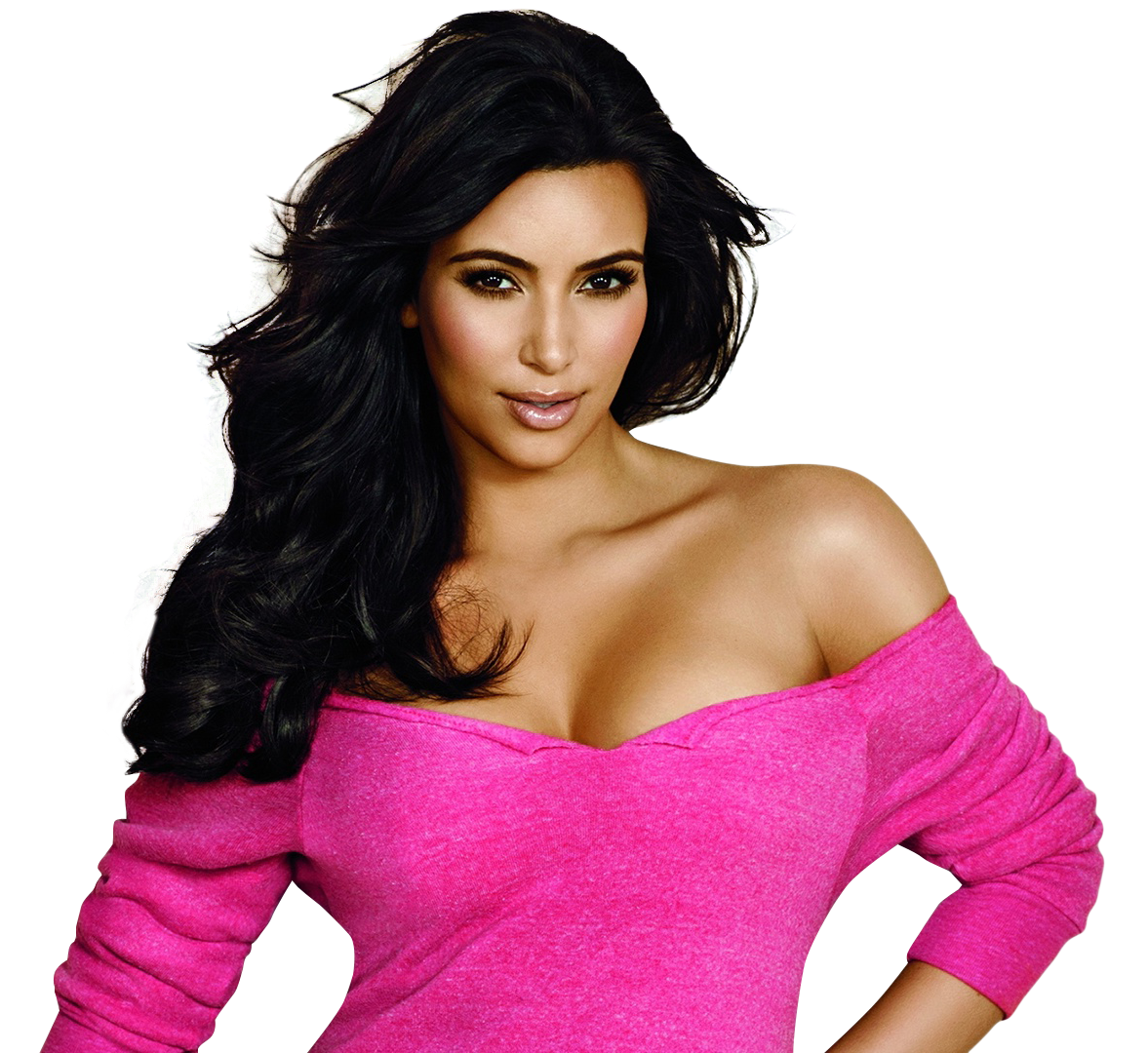 These Four Celebrities Endorsing Crypto Faced the Wrath of Regulators

On Monday, Kim Kardashian settled a $1.26 million case with the Securities and Exchange Commission (SEC) for not disclosing that she had been paid for an Instagram advert promoting crypto assets.

Kardashian is not the only celeb to have to be sued...

On September 19, 2022, the Securities and Exchange Commission filed an emergency action to stop an on-going fraudulent and unregistered crypto asset offering targeting Latino investors, run by defendants Mauricio Chavez and Giorgio Benvenuto through a company Chavez founded and controlled, CryptoFX, LLC. At the SEC's request, the Court issued a temporary restraining order halting the offering, as well as temporary orders freezing assets and granting other emergency relief. After a hearing on September 29, 2022, the Court also granted the SEC's motion for a receiver and extended the asset freeze.

https://www.sec.gov/litigation/litrelea ... r25547.htm
There are more ways than one to skin a cat.
Top 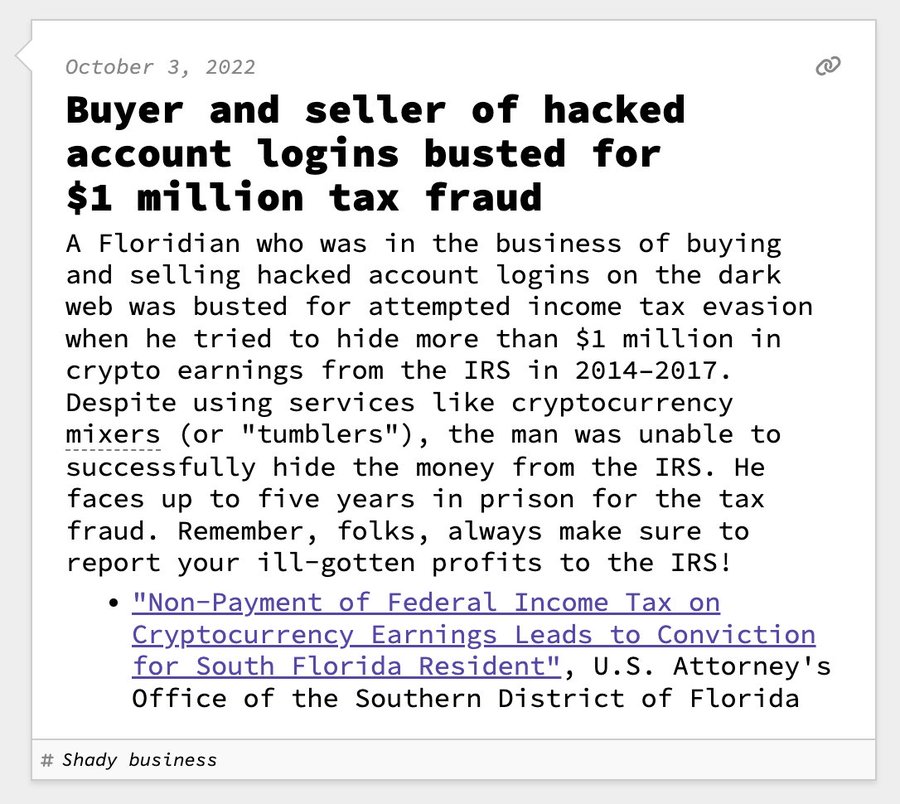 https://web3isgoinggreat.com/?id=buyer- ... -tax-fraud
There are more ways than one to skin a cat.
Top

Cryptocurrency exchange Binance temporarily suspended its blockchain network after hackers made off with around $570 million worth of its BNB token.

Binance said late Thursday a cross-chain bridge linking with its BNB Chain was targeted, enabling hackers to move BNB
tokens off the network. So-called cross-chain bridges are tools that allow the transfer of tokens from one blockchain to another.

The company said it had worked with transaction validators to pause creation of new blocks on BSC, suspending all transaction processing while a team of developers investigates the breach.

Binance is the world’s largest crypto exchange by trading volume.